Every two years the Retina Society awards the Custodis Lecture to a renowned researcher in honor of his life’s work with which he has made an outstanding contribution to matters relating to retinal diseases. This year’s Custodis Lecture will be awarded to Professor Dr. Bill Aylward, London.

In his lecture Bill Aylward will be dealing with the fact that there are many questions about the management of retinal detachment that remain unresolved, despite lengthy experience and research, including randomised controlled trials. For example it is still the case that patients with identical retinal detachments can have several completely different treatments in as many centres around the world. This is in contrast to many other conditions in medicine, and other sciences. One factor is the difficulty in applying the scientific method to the practical art of surgery. Another factor is the importance of psychological influences, which are greatly underestimated. This talk aims to explore the nature of the problem, and to suggest remedies that will help to resolve them.

Bill Aylward is a senior Consultant Vitreoretinal surgeon at Moorfields Eye Hospital. He gained a scholarship in Natural Sciences to Cambridge University in 1975, studying mathematics and physics. After one year, he switched to Medicine. He was appointed Consultant Ophthalmic Surgeon at Moorfields in 1994, where he developed a special interest in submacular surgery and retinal detachment. He introduced the technique of RPE translocation, as well as several innovations in retinal detachment surgery, including the use of subretinal dye. Bill Aylward was a member of the first board of Euretina, and was President from 2009 to 2011. He is Past President of the British and Eire Association of Vitreoretinal Surgeons, and is President of the Club Jules Gonin. Aylward is founder of the OpenEyes collaborative electronic patient record project.

The Lecture is named after Ernst Custodis (1898-1990).
Custodis was a pioneer in the field of retinal surgery when he showed that a closure of retinal breaks by sealing can cure retinal detachment. 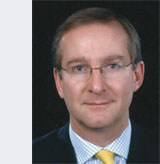